Say what you will about his personal life, be it the tabloid headline-inducing relationships or his involvement with Scientology, but Tom Cruise has been in a lot of movies. But what seems to be the unique element to his prolific career is the fact that most of his films were recognized as “Tom Cruise films” (i.e., films that star Tom Cruise). While his early career has had a few minor roles, and his later career also includes the occasional bit part (via cameo), most of Tom Cruise’s roles have been in the leading capacity for the majority of his career. Perhaps the genius of his unique personal life frequently making the headlines of grocery store checkout lines is how we are often reminded that he is starring in a new film sometime soon. This week’s two films highlight some of the varied work Tom Cruise has done on the big screen. 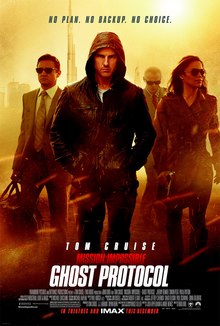 Perhaps what has given Tom Cruise his success is two-fold: being cast by a lot of legendary directors and a knack for action films. Quite early in his career, he worked with Francis Ford Coppola on The Outsiders (1983), which no doubt opened the door for him working with Martin Scorsese (The Color of Money (1986)), Rob Reiner (A Few Good Men (1992)), Stanley Kubrick (Eyes Wide Shut (1999)), Steven Spielberg (Minority Report (2002) and War of the Worlds (2005)), and J.J. Abrams (Mission: Impossible III (2006)). While there are plenty of other directors who have tied Cruise into their movies, the theme that is often seen in a fair number of his roles is that he excels at action. One of his franchises that epitomizes this is the Mission: Impossible series. With five films under his belt as Ethan Hunt, this 20+ year franchise helped to get him where he is today.

Because of a semi-botched mission to extract some information from the Kremlin that resulted in the famous Russian building being destroyed, Ethan Hunt (Tom Cruise) and his IMF team have been disavowed from the United States via the “Ghost Protocol.” Now it is up to them to find the perpetrator of the Kremlin bombing, a mysterious man who goes by the name of “Cobalt.” In their pursuit, the team finds that Cobalt is attempting to strike up a global war between the United States and Russia since his new target is to obtain Russian launch codes for their nuclear missiles. Intercepting the codes in Dubai, all the members of the IMF team are prepared to do what it takes to stop Cobalt. Unfortunately, as their plans begin to fail, it’s down to the wire to stop an incoming nuclear missile from detonating on San Francisco.

While Cruise has proven he can go the distance for action films, he has also shown he can excel in dramas as well. In fact, his three nominations for an acting Oscar have been from dramas. Oliver Stone’s Born on the Fourth of July (1989), Cameron Crowe’s Jerry Maguire (1996), and Paul Thomas Anderson’s Magnolia (1999) gave him nominations from the Academy, but none of them earned him the coveted gold statue. That’s not to say these (and other) films haven’t won big at the Oscars. For instance, Rain Man (1988) ended up being the Best Picture for that year. Of course, once again the mark of famous directors is at play here, as many of Tom Cruise’s more dramatic roles have been in the films guided by the experienced hands of a skilled director. It’s no wonder Rain Man also won an Oscar for Best Director, Barry Levinson.

Charlie Babbitt (Tom Cruise) is one of those fast-talking, deeply-in-debt scumbags who is always trying to break it big by dealing in less-than-exemplary deals. His recent deal quickly falling through places him many tens of thousands of dollars in debt, which is why he is pleased to hear his rich and estranged father has died. Unfortunately, none of the money of the estate is bequeathed to him. Instead, this money is willed to a mental institution where Charlie finds he has a heretofore unknown older brother, Raymond (Dustin Hoffman). Raymond is severely autistic, but also has the qualities of a savant that Charlie tries to exploit to make money in Las Vegas counting cards. While Raymond’s strict routines stress the brothers’ relationship, they eventually grow close enough that Charlie no longer cares about the money and would rather have a brother than be rich.