Have you ever tried to be something you’re not? Do you know someone who has succeeded at one talent, only to try and capitalize on the success by attempting a different talent? While Hollywood is filled with actors who want to be directors and directors who want to be actors, very few of them can succeed in both realms at the same time. Take Clint Eastwood, for instance. He was a great actor back in his heyday, and now he’s a great director, but there wasn’t much time where he was both. Somewhat similarly, Ben Affleck has shown he is an excellent director as of late, but his early acting efforts were not quite as exemplary. Perhaps Affleck has finally found his niche after being lauded for his writing skills early in his career. Of course, he still enjoys his time in front of the camera as well. This week’s two films look at the directing and acting of Ben Affleck. 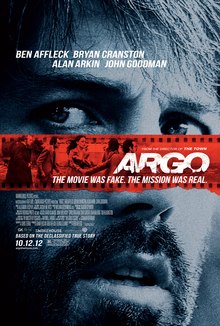 At age 25, Ben Affleck (along with his friend, Matt Damon) won an Oscar for Best Original Screenplay for Good Will Hunting (1997). While he had acted in a few films before, including two by director Kevin Smith (Mallrats (1995) and Chasing Amy (1997)), none of his roles could ever be taken seriously. Instead of pursuing his writing, Affleck ended up appearing in numerous films, most of which were forgettable or terrible (most still say Gigli (2003) is the worst film ever made). And yet, when he started directing full-length films, his acting seemed to improve almost overnight. Within five years from his directorial debut, Affleck would win his second Oscar, this time for the Best Picture, Argo (2012). While he also appeared in the leading role of this film, his performance was much better than most of his previous attempts.

Tony Mendez (Ben Affleck) is astounded to learn there are no viable plans to rescue the six escapees of the Iranian hostage crisis. While his exfiltration skills are top notch, he doesn’t have any better ideas. After a phone call with his son, while Battle for the Planet of the Apes (1973) is playing in the background, he is struck with inspiration. Using the cover of a Canadian film crew performing site surveys for a sci-fi film, Tony heads to Iran to help coach the six individuals through his plan. Even though all the prep work in Hollywood has been done to make the film look like it is real, the hoax only works on the ground if the six diplomats can manage to convince the Iranian security forces that it’s truly what they’re there for. In the moment of truth, the group head to Tehran International Airport and attempt to leave the country the only way they can.

In 2007, Ben Affleck put on his writing cap and wrote the screenplay for Gone Baby Gone. Despite having directed a short film much earlier in his career, Gone Baby Gone was his first feature-length film as a director. While he did not appear in the film, leaving the leading role to his brother, Casey Affleck, when 2010 rolled around, he was back in front of the camera (as well as behind it) for The Town. Once again, audiences could see that Affleck does have a talent for writing, as he wrote the screenplay for The Town as well. Despite the uproar of his casting as Bruce Wayne / Batman in the DC cinematic universe, this role, along with Nick Dunne in Gone Girl (2014), have shown Affleck takes his acting much more seriously now, perhaps as a result of his directing. Time will tell if his most recent writing and directorial effort, Live by Night (2017) will be as well received as Gone Baby Gone and The Town.

Doug MacRay (Ben Affleck) is just one of a group of friends who grew up together and are now partners in crime. Along with Jem Coughlin (Jeremy Renner), Gloansy MacGloan (Slaine), and Dez Elden (Owen Burke), the four friends rob a bank and take the manager, Claire Keesey (Rebecca Hall), hostage. After they release her, they realize she lives in their neighborhood and could potentially identify them to the police. To find out what she knows, Doug starts following her; but eventually, the two of them develop feelings for each other. Unfortunately, since the four friends are still rooted in the world of crime, they continue to make robberies. Because these heists still occur, they eventually find that the FBI has figured out who they are. The Feds perform a sting at Fenway based on intelligence they received from a jilted ex, with few of the crew managing to escape.

2 sum it up: 2 films, 2 deftly directed pieces by Ben Affleck