“Dying is easy. Comedy is difficult.” Unfortunately, the one man who perhaps epitomizes this statement is none other than Robin Williams. His too-soon departure from this world is still a tragedy many years later, especially considering his comedic skills. Of course, this also begs the question: if comedy is difficult, is it more difficult than drama? Sure, there are many attributes of comedy which are hard to master, such as wordplay, observation, and . . . timing, but could the emotional complexity of dramatic acting be as equally challenging? If we examine several actors who made the transition from drama to comedy, we’ll find they are vastly outnumbered by the actors who successfully transitioned from comedy to drama. Even though Robin Williams was best known for his comedy, his dramatic roles were indeed notable as well. This week’s two films examine Robin Williams’ dramatic roles. 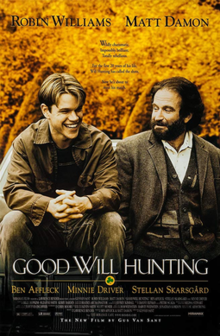 A good indicator of an actor’s dramatic potential lies in his nominations for Best Actor. This Oscar and its Supporting counterpart can almost show the progression of an actor’s career. While nominations can happen early in an actor’s career as recognition of some underlying talent, sometimes it takes several years before they are actually recognized with the gold statue of a winner. Only seven years after his first leading role, Robin Williams was first nominated for Best Actor in Good Morning, Vietnam (1987). His second nomination would come two years later for Dead Poets Society (1989), followed by his third nomination for The Fisher King (1991) two years after that. Finally, a decade after his first nomination, Robin Williams would win the Oscar for Best Supporting Actor in Good Will Hunting (1997).

When Professor Gerald Lambeau (Stellan Skarsgård) finds a difficult mathematics problem he posted for his students has been solved by an anonymous person, he discovers none of his graduate students stepped forward with the solution. Upon leaving another, even harder problem, he finds that the janitor, Will Hunting (Matt Damon), was the mysterious mathematician. While Will has plenty of talent, he chooses to live his life simply, never pushing the limits of his possibility. It soon becomes clear to Lambeau that he must pass Will onto one of his therapist colleagues, Dr. Sean Maguire (Robin Williams). At first, Will doesn’t take the therapy seriously, but as Sean begins to open up about his own life and struggles Will eventually finds they share much of the same trauma. Now that his past is behind him, Will drives off to California to fully live his future.

It’s interesting to think that, by 1989, Robin Williams had only acted in a dozen films. Sure, just like other comedians, he started out with a long and successful career in television, but by the 1990s his transition into film was quite complete. By the turn of the century, Williams had tripled the number of his film roles with such classics as Hook (1991), Aladdin (1992), Mrs. Doubtfire (1993), and Jumanji (1995). Amidst these comedic gems, he continued to perform in dramatic roles like What Dreams May Come (1998), Bicentennial Man (1999), and Insomnia (2002). Clearly, Williams was a master of both muses of acting: Thalia (comedy) and Melpomene (tragedy). Given the tagline of Dead Poets Society (1989), he certainly seized every day given to him, up until his very last one.

An alumnus of Welton Academy, John Keating (Robin Williams) has taken it upon himself as an English teacher to inspire the students under his purview at the same school where he once was one of them. One of these students, Neil Perry (Robert Sean Leonard), is inspired by Keating’s encouragement to “seize the day” and decides to resurrect the Dead Poets Society, a group which once had Keating as a member. Neil continues to open up and learns that his passion for drama and acting does not align with his father’s wishes for him to be a medical doctor. With no other recourse, Neil takes his own life. This action causes the administration of Welton Academy to scrutinize Keating’s teaching style. After they come to the conclusion that Keating’s encouragement of free will was the culprit, he is forced to resign. However, the students resist the verdict and stand up for Keating one last time.