There’s a very fine line between a film that’s self-aware and a parody. Often, a self-aware movie is one that ascribes to the tropes of a particular genre but does so with a tongue-in-cheek knowing wink. Parodies are usually films that play off the success of another film (or series/franchise of films) to make fun of the little foibles that make the referenced film so successful. In terms of straight comedy, these movies rely on previous knowledge of source material endemic to the popular culture surrounding it. Consequently, while parodies are seen as “lower” comedy, and are rarely taken seriously (for obvious reasons), by piggybacking on a pop culture phenomenon, some of these parodies are almost as well-known as the movies they’re parodying. This week’s two films examine some successes from the golden age of parody: the 1980s. 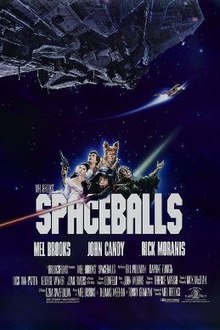 Despite acts like Abbot and Costello and The Marx Brothers being some of the trailblazers of parodies, the sub-genre of comedy didn’t really take off until the late 1970s and early 1980s. Part of this stemmed from the box office successes of big-budget action films, which themselves were ripe for parody. No genre, film, or franchise is safe from parody. Documentaries were parodied in This is Spinal Tap (1984), Frankenstein (1931) was parodied in Young Frankenstein (1974), and the James Bond franchise was parodied by the Austin Powers franchise. Of course, one of the kings of film parodies is none other than Mel Brooks. He parodied Broadway musicals in The Producers (1968), westerns in Blazing Saddles (1974), and the epitome of the space opera, Star Wars (1977), in Spaceballs (1987).

Planet Spaceball is in trouble! They’ve run out of fresh air, and now President Skroob (Mel Brooks) is trying to figure out how to steal the clean air from nearby planet Druidia. By holding Princess Vespa (Daphne Zuniga) hostage, Skroob believes he can get the access codes for Druidia’s atmosphere shield. Before Dark Helmet (Rick Moranis) can arrive to kidnap the princess, she runs away from home, causing her father to hire the mercenary Lone Starr (Bill Pullman) to pursue her. While Lone Starr gets to Vespa first, his spacecraft runs out of fuel, causing them to crash land on a desert planet. While Lone Starr comes across a sage known as Yogurt (Mel Brooks) and learns about “The Schwartz,” Vespa is finally captured by Dark Helmet. It’s then up to Lone Starr to chase after Dark Helmet and use his newly acquired Schwarz powers to save the day.

Sometimes parodies don’t necessarily poke fun at a single popular film. Sometimes these parodies cover many films within a genre. Sure, with as many Dracula films as there are, you’d expect to see a Mel Brooks film like Dracula: Dead and Loving It (1995). But for each of these films, you’d have parodies for high box office grossing films like Top Gun (1986) that was parodied in Hot Shots! (1991). However, with no Top Gun sequel, the Hot Shots! sequel (Part Deux (1993)) had to resort to parodying war films in general. Likewise, the Naked Gun series was a spinoff of the Police Squad! parodies of the “cop drama” genre. Even animated films are not immune, as shown by the parody that is Shrek (2001). And yet, in the 1970s, the “disaster” genre really took off, thus providing plenty of fuel for the cult classic that is Airplane! (1980).

On a flight from Los Angeles to Chicago, an in-flight meal causes the flight crew and many of the passengers to become ill due to food poisoning. With nobody to fly the plane, flight attendant Elaine Dickinson (Julie Hagerty) contacts the control tower in Chicago, where she learns that the inflatable autopilot should get them to Chicago, but is unable to land the plane. Fortunately, Elaine’s former boyfriend, Ted Striker (Robert Hays), is a former fighter pilot and is also one of the passengers on the plane. Unfortunately, he has PTSD from his military service and has developed a “drinking problem,” as well as an aversion to flying, as a result. It’s now up to Ted’s former commanding officer, Rex Kramer (Robert Stack), to help him land the plane safely at Chicago. While the introduction of his former commanding officer causes some PTSD for Ted, the weather also creates a wrinkle in the landing. Will Ted safely land?