Sometimes, I think we take the simple act of survival for granted, especially on Earth. Sure, there are extreme climates that prohibit long-term survival, but most areas on Earth can be survived for a significant amount of time. Humans have an inherent ability to find food, water, and shelter, even in the most unforgiving of habitats. Most of this is predicated on the fact that Earth has breathable air. Remove that variable, and suddenly survival isn’t something that can be brute-forced. Instead, survival becomes nearly impossible. Humanity has not spent much time in outer space to know how to survive if something goes wrong. Even the few, potentially deadly incidents have had a significant amount of luck that contributed to the astronauts’ survival. This week’s two films highlight what it’s like to survive in space.

Partly because Earth has some “Goldilocks” conditions that are conducive to life—and therefore survival—we often forget the insurmountable odds against surviving on other planets. As we’ve seen in such movies like The Martian (2015), if something goes wrong on another planet, even one as “close” as Mars is, the chance of survival is so slim that any efforts to remain alive are mostly used to prolong the inevitability of death. However, if Earth’s conditions change, and humanity is no longer able to survive on their home planet, then we need to find a suitable planet where we can live again. There’s nothing that meets these criteria in our solar system, but if we were to find a way to reach another part of the universe, humanity might just have a chance at surviving. Even this hopeful scenario still has its challenges.

Humanity is struggling to survive on Earth. Plants are having trouble growing due to an extensive array of blights, which has also led to dangerous dust storms. While the educators of Earth have turned their back on science, NASA has been working in the shadows, developing a plan to send a crew of astronauts through a wormhole discovered near Saturn years ago. These astronauts have one mission: to determine which of the three planets orbiting a black hole can sustain life. Unfortunately, the theory of general relativity rears its ugly head after one of the worlds is deemed unsuitable. With only enough resources to visit one more planet, the crew proceeds with their best bet and finds one of the advanced party has survived in stasis. This lone survivor knows he has but one chance to escape, and the crew has just given it to him. Now in an emergency situation, sacrifices must be made to save humanity. 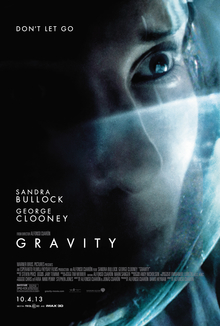 Surviving on alien planets is challenging, but it becomes a moot point if we can’t even reach these extraterrestrial worlds. It is a credit to our engineers and scientists that very few astronauts have died during our brief ventures out into space. Some situations, like Apollo 13 (1995), could have ended in death but were saved by ingenuity—if not by a sheer miracle. Despite our mostly-spotless track record of surviving in outer space, plenty can go wrong in this unforgiving vacuum. For the most part, the spacecraft we use to travel into space protect astronauts from plenty of the problems associated with the journey. However, once an astronaut “steps outside,” even their space suits can only do so much for them should anything go wrong. If the spacecraft then ceases to be a safe haven, the astronaut has few, if any, options for survival at their disposal.

Dr. Ryan Stone (Sandra Bullock) is on a spacewalk to fix the Hubble Space Telescope when Houston comes on the communication line to let the astronauts of STS-157 know there’s a problem. The Russians shot down one of their satellites, which caused a ton of debris to spread and destroy many space assets, including the communication link back to Mission Control. In no time at all, the debris has reached the astronauts and destroys the Space Shuttle Explorer. Stone and Lieutenant Matt Kowalski (George Clooney) are the only survivors, and they only have a Manned Maneuvering Unit (MMU) to get them to the International Space Station (ISS). Once they arrive, they find all the spacecraft have been used to evacuate, leaving one final option: traversing to a nearby Chinese space station to use a Russian Soyuz spacecraft to return to Earth.

2 sum it up: 2 films, 2 survival scenarios in space