Separating a character from an iconic role can be difficult. In some ways, audiences will always associate the actor with the part that made them a household name. This is especially true of long-running franchises who have singular main characters. I’m sure plenty of people knew who Daniel Craig was before he portrayed James Bond in Casino Royale (2006), but he certainly made his name known after then. It’s weird to think people were upset that someone with light hair and light eyes could play James Bond, considering how he’s really owned the role for the last 13 years. This name recognition likely earned him many other parts over the years, but occasionally he’s able to break out of that “action hero” typecast and have some fun. This week’s two films highlight some non-James Bond roles for Daniel Craig.

The Adventures of Tintin 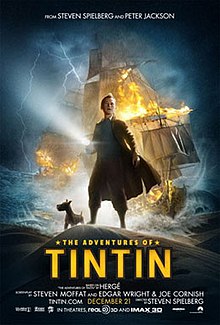 While most of Craig’s roles have been more action- and drama-oriented, there have been a few instances where he’s done something a little against type. Even in family-friendly fare like The Golden Compass (2007) to doing voice work in foreign animated films like Renaissance (2006), Daniel Craig has mostly used his versatile talent to play somewhat similar “hero” archetypes. Occasionally, he’s been able to portray distinctly different characters, even to the point where movies like Logan Lucky (2017) have used the phrase “introducing Daniel Craig” in their trailers. Sometimes, he is almost indistinguishable to the point where an audience gets to the credits and learns that Daniel Craig was in the movie (except for an uncredited cameo in Star Wars: The Force Awakens (2015)). For me, this was the case when I reached the end of The Adventures of Tintin (2011).

Ivan Ivanovitch Sakharine (Daniel Craig) unsuccessfully tried to buy a model of a ship from a young boy named Tintin (Jamie Bell). The model of the Unicorn was stolen when Tintin went to the library to investigate its past, which led him to suspect Ivan of the theft. While Tintin’s model was broken the night before, he finds that Ivan already has a model of the Unicorn, and it’s fully intact. Upon discovering a scroll that was hidden in the model, Tintin realizes why Ivan wants the duplicate model. When Ivan sends men to kidnap Tintin and retrieve the scroll, the young protagonist meet’s the ship’s drunk captain, Archibald Haddock (Andy Serkis), who has been overthrown by the crew’s mutiny. Traveling with Tintin to find the third Unicorn model and scroll, Haddock realizes he’s the great ancestor of the Unicorn’s original captain. With the third scroll found, Ivan’s relation to the Unicorn is also revealed.

While Layer Cake (2004) likely earned Daniel Craig his spot as the most recent James Bond, movies like The Invasion (2007), Defiance (2008), and The Girl with the Dragon Tattoo (2011) helped bridge the gaps between Casino Royale (2006), Quantum of Solace (2008), and Skyfall (2012), respectively. While his time as James Bond is coming to an end with his most recent portrayal next year, one wonders what kinds of films he’ll do next. As mentioned before, much of his work has been action- or drama-oriented, so movies like Cowboys & Aliens (2011)—which fuse both western and sci-fi genres—have shown he can somewhat break out of these genres and into others that lie adjacent to them. I’d certainly like to see him in either a serious western or sprawling sci-fi in the future, but for right now I have to stick with Cowboys & Aliens.

Waking up in the middle of the desert with no memory of who he is, a mysterious man heads into the nearest town to learn that he is Jake Lonergan (Daniel Craig) and that he is wanted by the law. After being captured, Jake is almost handed over to Colonel Woodrow Dolarhyde (Harrison Ford), who was the victim of Jake’s thieving ways. Jake’s one saving grace is that aliens attack the town and abduct many of the townsfolk, thus adding confusion and chaos to the situation that allows him to escape. With the appearance of the aliens, Jake remembers that he stole Dolarhyde’s gold to give to the aliens and that the mysterious bracelet on his arm is a weapon, which he uses to down one of the alien craft. As Jake regains the remainder of his memories, he teams up with Dolarhyde to take down the aliens that are stealing gold and abducting humans so they can learn our weakness and conquer Earth.

2 sum it up: 2 films, 2 characters played by Daniel Craig